Farhan completed his Master of Public Policy at the Australian National University (ANU) in 2016, through an Australia Awards Scholarship, and was awarded the Master of Public Policy Prize for maintaining the best aggregate score amongst his peers throughout the program. He now works on the Australian Government’s flagship private sector development program, Market Development Facility (MDF) in Pakistan.

As part of the work he carries out as the program’s Quality and Inclusion Specialist, Farhan conducts impact assessments to determine the pro-poor impact of MDF’s interventions with the private sector in Pakistan. This impact is measured by additional employment and income generated, including how these influence individual wellbeing and facilitate change for women’s economic empowerment in each of the sectors MDF works in.

Farhan says working with MDF has helped him build a good understanding of the constraints and challenges of private sector development. He has designed, negotiated and managed multiple partnerships with the private sector, including with input suppliers, processors, agri-businesses, farmers, and manufacturers, for pro-poor growth. ‘Through these partnerships, I hope that the growth of the private sector is more inclusive of less privileged men and women,’ he said, ‘Similarly, through these partnerships, I worked towards the achievement of program and DFAT goals regarding women’s economic empowerment, disability, and nutrition.’

Before his Australia Awards Scholarship, Farhan worked as Assistant Manager, Training, for the United States Agency for International Development’s Assessment and Strengthening Program (ASP) at the Lahore University of Management Sciences (LUMS). Farhan considers his time at LUMS as a turning point in his career. ‘Working for the ASP helped me realise the need to build my capacity, and I believe ANU has one of the best public policy programs,’ he says, ‘During my job at LUMS, I got to know about policy and governance issues in Pakistan, and I decided to go and get a degree in public policy.’ 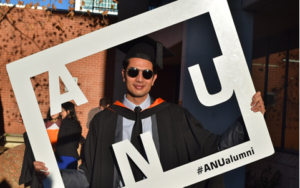 Farhan then started his Master of Public Policy at the Australian National University (ANU) through an Australia Awards Scholarship. ‘My first impression about Canberra was ‘quiet and green’. The first thing that I noticed at ANU was the cultural diversity that local and international students bring to the campuses and communities,’ he says.

Farhan had a rewarding experience in Australia. He was elected as the President of Crawford School Students’ Society (CSSS) and had the opportunity to work with ANU thought leaders through the Vice Chancellors’ Student Leadership Program.

‘It was the opportunities for personal and professional growth, including receiving the Raymond Anthrope Graduate Diploma Award and the Master of Public Policy Prize that became the highlight of my time in Australia.’

A team of five students, including Farhan, also participated in regional rounds of the 2015 Hult Prize in Shanghai. The team presented an idea that aimed to provide quality and early childhood education to 10 million children. ‘It was a moment of extreme pride to represent ANU and compete with teams from the world’s best universities,’ he says. ‘These are the experiences that I hold close to my heart and will never forget.’

In addition to his Master’s degree, Farhan also completed the requirements for a Graduate Diploma in Public Administration. According to the Dean at ANU’s College of Asia and the Pacific, Farhan achieved the best overall aggregate results, thus granting him the Raymond Anthrope Graduate Diploma Prize, 2015. In July 2016, Farhan was selected to deliver the outgoing scholar address at the mid-year Welcome & Farewell Australia Awards event in Canberra.

On his return home, Farhan felt that the knowledge and skills gained through his Australia Awards Scholarship were ideal for him to succeed in a diverse environment like Pakistan. He believes that management and negotiation skills, along with contact cultivation in policy-making, are incredibly useful in the country. Farhan emphasises that ‘If you want to bring about policy change, multiple groups have to be brought together. Persuasion rather than enforcement is crucial.’