Australia Awards alumnus Muddassir Riaz Malik is making a significant impact in developing districts in Punjab, Pakistan. He has been instrumental in improving several public service initiatives in districts under his purview. Muddassir received an Australia Awards Scholarship in 2015, through which he graduated with a Master of Public Policy from the Australian National University.

During his time in Jhang he dealt with matters of land revenue collection, alongside administering education and the health department in the district. He was also responsible for the coordination among various provincial departments in the district for effective policy implementation along with chairing the district intelligence committee for maintaining law and order.

As the Deputy Commissioner of Jhang, Muddassir successfully reformed the District Head Quarter (DHQ) Hospital Jhang through upgrading facilities, improving staff training and implementing better administration policies. His efforts started to show results within four months – leading to an increase from 1,600 consultations per day in the Out-Patient Department (OPD) to 3,800 per day. This is the highest average number of outpatient department consultations ever recorded in any DHQ in Punjab. This was achieved through various interventions, including the introduction of new female registration associates, patient facilitators and pharmacy associates; increasing facilitation counters to manage the load; increasing availability of medicines; and improving doctor attendance. Due to Muddassir’s efforts, DHQ Jhang Hospital became the first DHQ in Punjab that not only achieved ISO 9001 and 14001 certifications but also received minimum service delivery standard accreditation from the Punjab Health Care Commission.

Muddassir additionally introduced international-standard sports facilities for both boys and girls in the district of Jhang. These facilities include an International Swimming Federation standard swimming pool, sports centre for fifteen in-door games, separate basketball courts for boys and girls, hockey grounds and cricket pitches. Muddassir believes that sports are an essential part of physical development and character building for both boys and girls and that such facilities will bear fruit in terms of enhancing tomorrow’s communities.

Muddassir has been using skills acquired during his time in Australia to fulfil his duties as a public servant.  ‘When my children started studying in Australia during my Scholarship, I observed the emphasis put on sports in Australian schools. The love I developed for sports when in Australia, and having realised the positive outcome of sports activities, I introduced state-of-the-art sports facilities in the district,’ he says, ‘I used impact assessment studies – a course at Crawford – to improve service delivery in the health sector in Jhang.’ 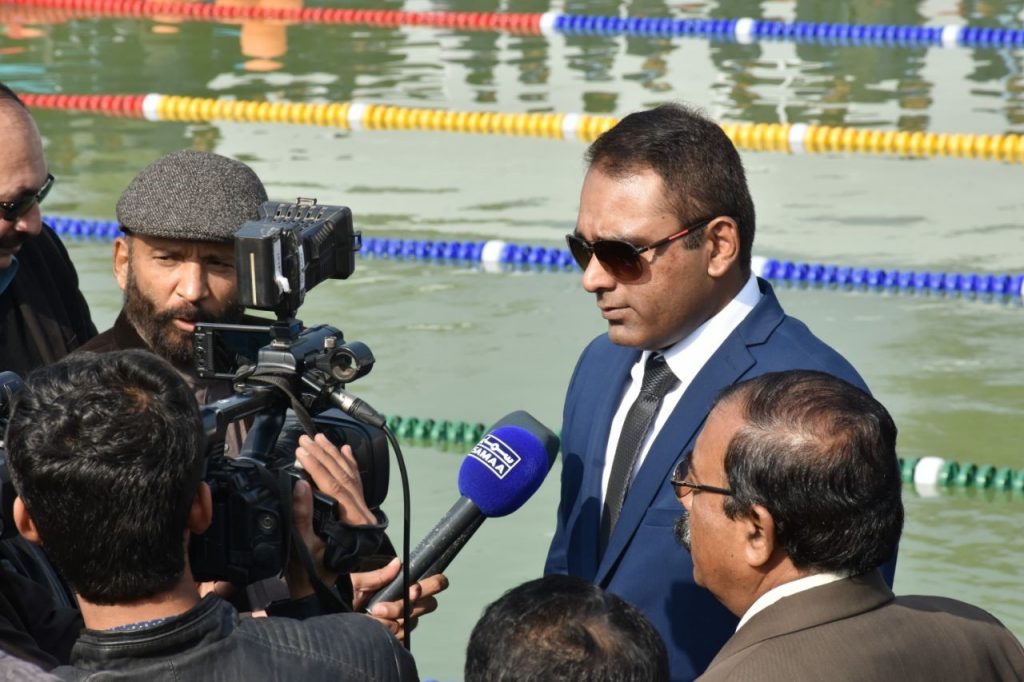 Muddassir Riaz Malik addressing the media at the inauguration of National Athletic Centre in Jhang, Pakistan

Muddassir adds that his Australia Awards Scholarship has had an immense impact in his career development:

‘Australia Awards helped my career with knowledge, diverse experience and a skill set that I learnt at the university’.

‘I developed my research skills during my time Australia, which was very useful during my assignment as the Additional Secretary Welfare, especially when I was given the task to procuring a helicopter for the Government of Punjab!’

‘Australia is now just like my second home and interacting with Australians is always a pleasure’. Australia Awards is a great influence in his personal and professional life. ‘I have not only become more confident and independent in dealing with my personal matters, but I have also learnt how to live with people of different nationalities and views.’ Muddassir appreciates that his time studying through his Scholarship in Australia has helped him develop a better sense of listening to arguments as well as tolerating them. ‘As a person I have become more rational, composed and focused.’

In 2018, Muddassir was transferred from Jhang to Multan as the Deputy Commissioner. Multan is the 7th largest city of Punjab with a population of over 4.7Mn and is considered the largest city in Southern Punjab.

Muddassir plans on continuing his work as a civil servant and aims to also specialise in health policy or water resource management through further education.