The UN Women theme for this year’s International Women’s Day is ‘Gender equality today for a sustainable tomorrow’, recognising the contribution of women and girls around the world who are building a more sustainable future for all by leading the charge on climate change adaptation, mitigation and response.

In honour of all the women working to make tomorrow’s world sustainable, Australia Awards is celebrating the achievements of alumna Mehak Masood. Mehak received an Australia Awards Scholarship in 2018 to complete a Master of Environment (Climate Change stream) from the University of Melbourne.

Returning from Australia in January 2020, she started working as a Climate Change Technical Adviser at the German Agency for International Cooperation (GIZ) Pakistan, where she developed the climate change portfolio. In this role, she contributed to curbing climate change in Pakistan by providing technical support to the Ministry of Climate Change to achieve its climate action goals and targets set in the Paris Agreement.

“My job portfolio included supporting the Ministry of Climate Change in Nationally Determined Contribution revision and ambition raising, which is an example of the successful implementation of the Paris Agreement’s goals and targets,” says Mehak.

Mehak supported the Ministry of Climate Change and the National Energy Efficiency and Conservation Authority to revise Pakistan’s Nationally Determined Contribution by devising policy recommendations and a framework for the technical mitigation working group. She also supported the Ministry to develop policy options for achieving permanent abatement of nitrous oxide emissions from nitric acid production in Pakistan.

Mehak’s efforts and support led to inputs incorporated in chapters 4 and 10 of the Government of Pakistan’s Updated Nationally Determined Contributions 2021.

She has also been engaged as an environmental and social safeguard compliance expert on projects funded by the United States Agency for International Development and the World Bank. 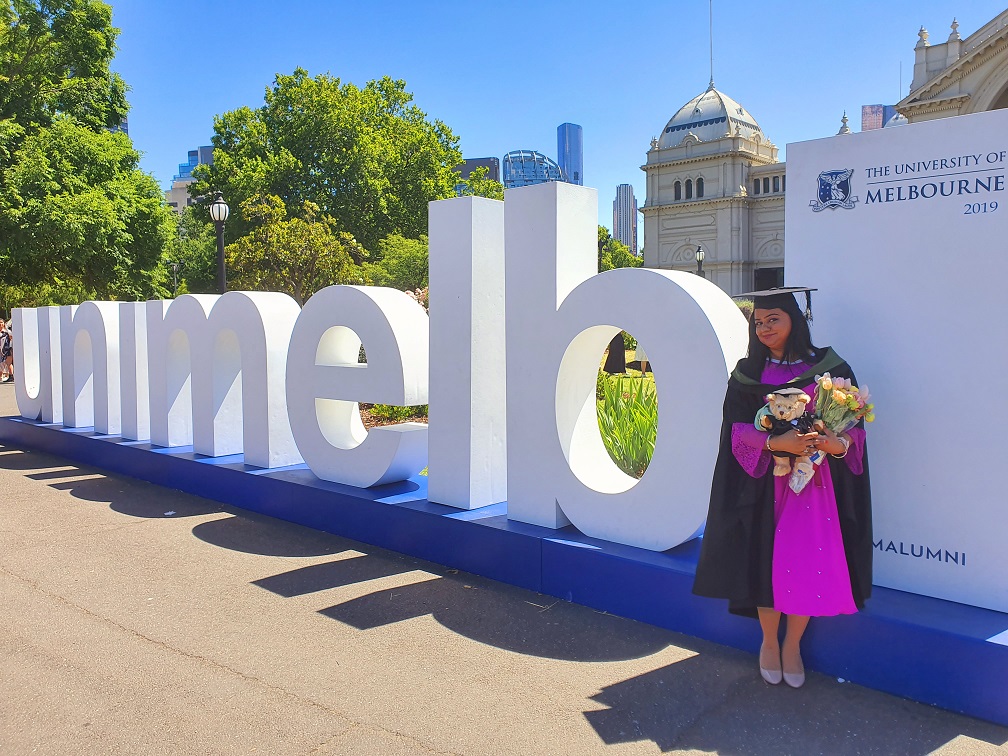 Mehak during her graduation ceremony from University of Melbourne

Mehak is now excited about transitioning into the corporate sector. She has taken up the position of Manager Sustainability and Climate Change in Interloop Group, a leading global textile manufacturer and exporter. She is enthusiastic about leading dynamic projects that aim to achieve Sustainable Development Goals and develop voluntary carbon markets and a sustainable traceability materials supply chain, as well as focusing on carbon disclosure, water stewardship, and waste and circularity.

Mehak believes she has made lifelong friendships with fellow alumni. She describes her two years in Australia as a time of self-discovery, recognition, motivation, perspective change, paradigm shift and sharpening of her leadership abilities.

“In a nutshell, my 24 months in Australia was a rocket booster for my academic, professional and personal trajectory,” Mehak says.

During her time in Melbourne, Mehak worked as a project assistant and auditor in the Green Impact Program with the Melbourne University Sustainability team. Her work supported the group as exemplars of sustainable, equitable community through their campus operations, environment and engagement activities.

Mehak now plans to work more cohesively with all stakeholders to strengthen the climate finance portfolio in Pakistan, particularly the private sector. “With my work sector transition, I will focus more on the private sector and the opportunity to tap into Voluntary Carbon Markets,” she says, noting that she also wants to develop a business enabling environment for green professionals, especially women.