Alumnus Gouhar Pirzada is working tirelessly to improve the livelihoods of youth in Pakistan by providing them with the necessary skills to thrive in a developing country. Gouhar is the Chief Executive Officer of STEP Institute of Art, Design & Management, a technical and vocational education and training (TVET) institution. STEP not only trains students but also academic and administrative staff in the TVET sector.

Gouhar participated in an Australia Awards Short Course on Supporting the Strengthening of TVET: Policy and Management delivered by Queensland University of Technology (QUT) in 2017. He also holds a Master of Public Administration from the University of the Punjab and a second master’s degree from London Metropolitan University, United Kingdom, in International Business.

“Australia Awards has given me multiple opportunities to gain experience, evolve, grow and get recognised. It gave me a breakthrough in contributing towards a strong TVET system in Pakistan,” says Gouhar, noting that Australia Awards has played an “extremely important” role in building his career.

His contribution has included training more than seven thousand people and initiating new concepts (such as Green TVET, Entrepreneurship and Inclusive TVET) through STEP. This work has been widely recognised. The British Council selected STEP as one of four TVET providers in Pakistan that were offered a one-year mentoring program to further improve these institutions’ skills and certifications. Pakistan’s National Vocational & Technical Training Commission also assessed STEP as Grade A (the highest grade) for two consecutive rounds in its accreditation assessments. In recognition of these achievements, Gouhar was declared an Impact Story Winner by Queensland University of Technology (QUT) in 2018 and 2020. 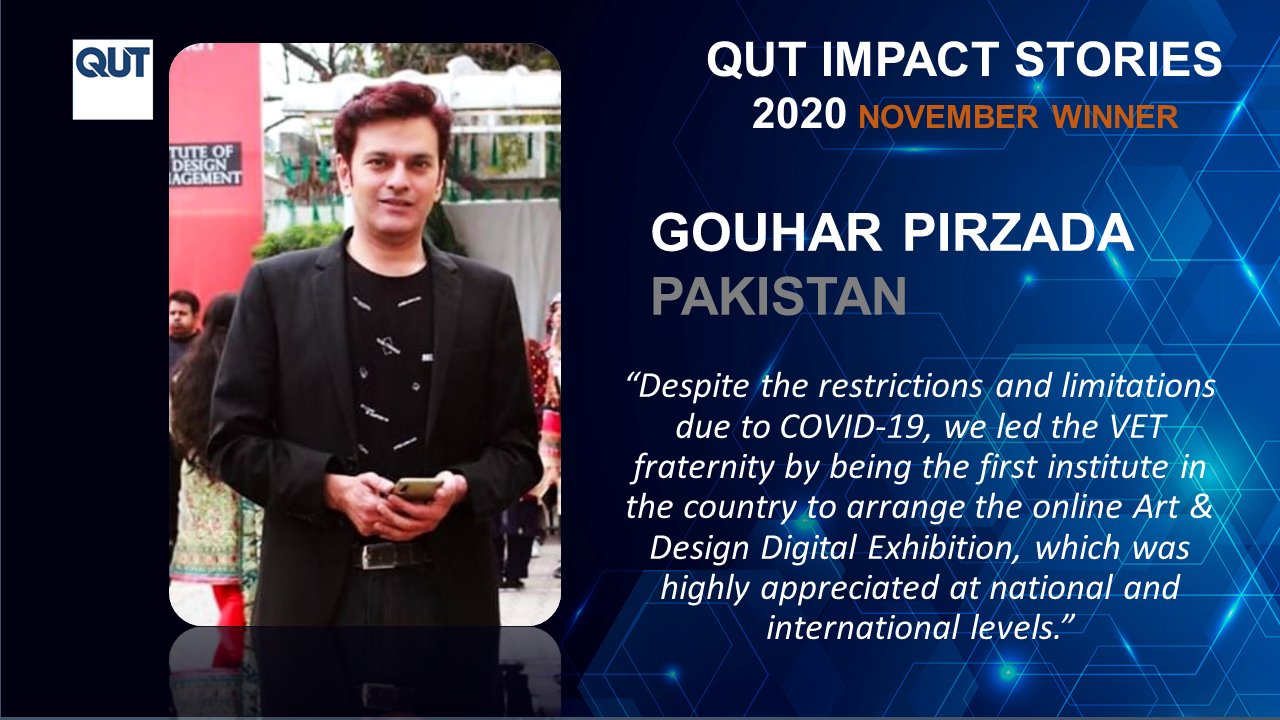 In addition, Gouhar’s efforts have directly contributed to developing more than twelve national vocational qualifications, incorporating a Computer-Based Training approach. He also drafted the Assessment Rules for Vocational Qualifications in Pakistan, which will be applied throughout the country from 2023.

In 2021, Gouhar received an Australia Awards alumni support grant, through which he completed a Level 4 Assessment and Training qualification from Australian Adult Learning Institute. This one-year online course built his capacity to conduct an eight-week staff development training for officers at Punjab’s Technical Education and Vocational Training Authority.

Gouhar also works as Chairman of STEP Skills Development Foundation (SSDF), a not-for-profit subsidiary of STEP, which focuses on poverty alleviation through capacity building, fundraising and advocacy programs. Through SSDF, Gouhar has initiated a ‘Sunday School for Working Children’ program, which provides free educational services and vocational skills to out-of-school working children in Pakistan. It follows the national approved curriculum and supports children at grades 1 to 5. This program provides the students with an annual stipend of PKR12,000 and free books, bags and meals during school hours, all under the supervision of qualified staff. Courses are offered in Computer-Aided Design, graphic design, fashion design, tailoring, hairstyling and filmmaking, among other topics.

Gouhar takes a lot of pride in this program and considers it his biggest achievement. He is expecting more than one hundred children to enrol in the next academic year, for which STEP is looking to broaden their scope for an impactful intervention. Gouhar plans to improve the Sunday School in the future to turn it into a sustainable model.

“One lesson that my Short Course trainer at QUT taught me was to ‘connect the dots for sustainable success.’ Since 2017, I have been keenly connecting the dots. This has proven to be a successful path and I intend to follow it in future with even more rigour and compassion,” he concludes.